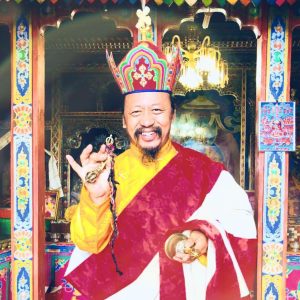 Khenchen Lama Rinpoche was born on 20th November 1978 in Kham (Eastern Tibet). Since very early childhood he exhibited unusual compassion and fondness towards meditation. At the age of three, the head of Nyingma lineage His Holiness Sera Yangtul Rinpoche recognized Khenchen Rinpoche as a true reincarnation of Padma Dagnag Lingpa. Padma Dagnag Lingpa was a reincarnation of Nupchen Sangye Yeshe, one of the five closest disciples of Guru Padmasambhava and the founder of the Yogi lineage of Tibetan Buddhism. H.H. Sera Yangtul Rinpoche also prophesized, that Khenchen Rinpoche would particularly benefit students in Europe and the USA in this lifetime.

Despite the pressures to take over the abbot charges of four monasteries at an early age, Khenchen Lama Rinpoche was encouraged by his mother to undertake rigorous study and practices.​

Rinpoche is specialized in the teaching of:

While studying, Rinpoche also spent two to three months each year in silent solitary retreat summing up to about four years of retreat in total.​

After receiving his Khenpo and Khenchen titles, Khenchen Lama taught debate, astrology, sutra and tantra at many different monasteries and centres in Tibet, Nepal, India, Malaysia, Singapore, China and the United States.​

Besides teaching, his main efforts have concentrated on building and sustaining an orphanage in Tibet that currently provides accommodation, food, clothing and education to 150 children. He would also like to build a retreat centre for yogis in Tibet in the future. Rinpoche hold United Kingdom’s citizenship.​

The following are Rinpoche’s scholarly publications:​